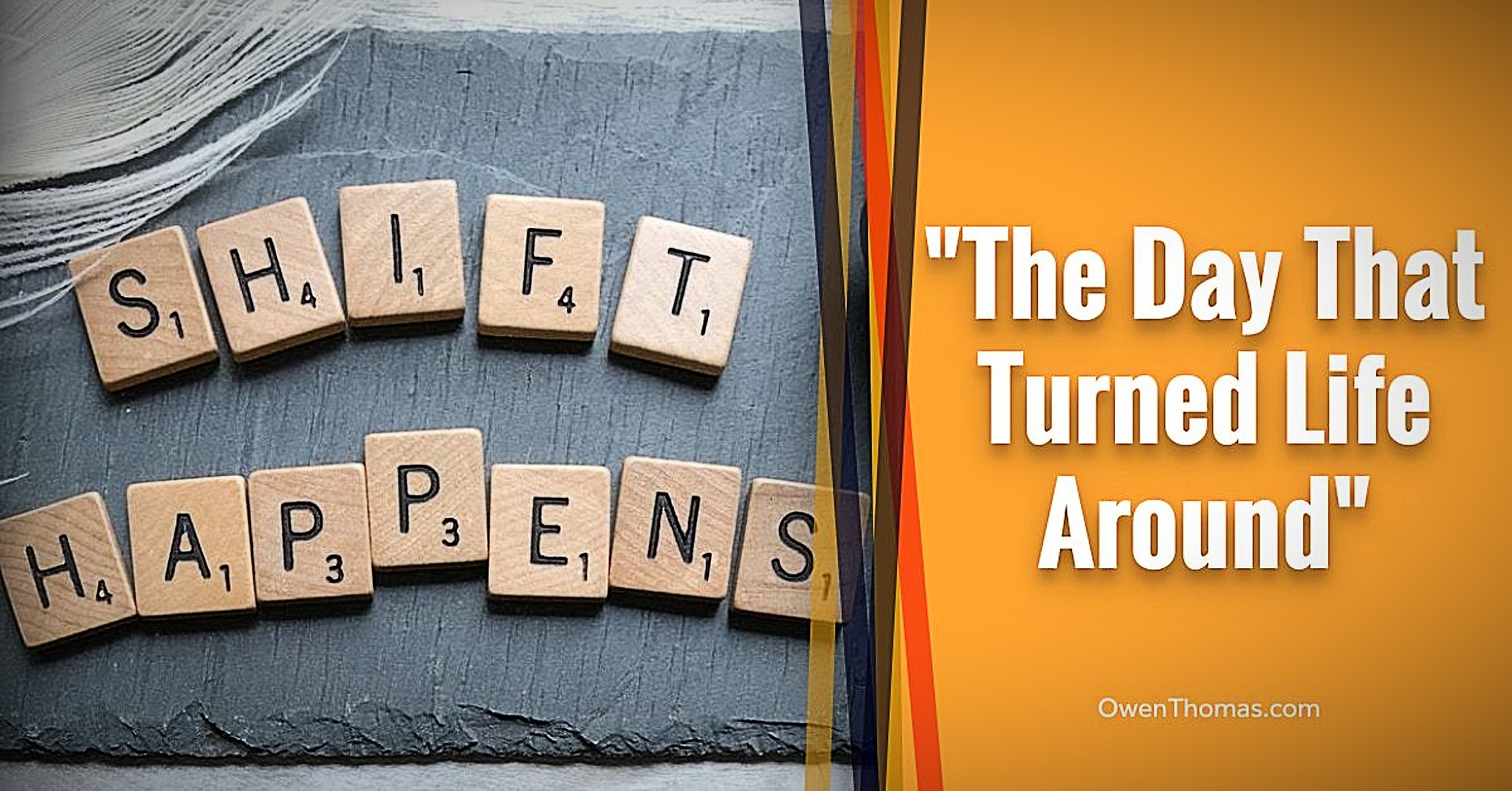 For the first time in months, I felt creative. The music album I was working on suddenly started to take shape, and it had happened all within minutes of making a phone call. It was the third album in a series of motivation albums I had created. The first album, which had been released about four years earlier, had been an enormous success for the industry it had been made. It ended up selling over fifty thousand units. Of course, based on that success, the requests for another had come quickly, and number two looked like it was on the same trajectory. I found it was taking me around eighteen months to create each one with about a year or so break to allow the creative ideas to percolate and the motivation to reappear.

This third album was taking more time. I felt stagnant, and all the ideas were tired and formulaic. And yet, it had all changed with a phone call—a phone call that put me on a path that would change my life completely.

For a long time, I hadn’t felt right. A few years earlier, as a result, I had revamped my diet. I had read a book on the Pritikin diet and gone down that path, and that had branched into some more obscure diet programs – Raw food only, all fruit diets, all of which I dabbled in for a while. I can be a little obsessive at times, so I never half-heartedly attacked them.  I can hear my sister agreeing with me as I write. According to recent blood tests, I was travelling pretty well. My cholesterol was well and truly good, there was undoubtedly no weight issues, yet I still didn’t feel good.

I thought about it for some time and tried to avoid the conclusion that lurked beneath the surface. I had, after some time, got my physical health in order, so it can’t be that. My heart rate was excellent, and lungs where all the test where showing AOK. So it must be mental, emotional or at least in that realm. Perhaps I hadn’t handled the destruction of a business I had spent eight years building very well. Having close friends and business colleagues make decisions that I believed over time would be destructive to all. It was not easy to witness. Seeing my dreams smashed had been difficult. Yet, I felt I had handled it pretty well. So maybe there were other things I hadn’t managed well.

When I was studying for my Bachelor of Arts, I had done a unit of psychology. The critical lecturer had mentioned that everyone by the age of 25 had had a least one major trauma they had not dealt with well. I didn’t believe I had any. So it must be the business – But perhaps I need to see someone professionally to make sure.

Now that was something I didn’t want to do.

I was afraid – no terrified, would be a much better word to use. I didn’t want anyone messing with my head. I didn’t want to end up in the “loony bin”.  I had zero trust in anyone. It didn’t help that the group of friends I had at the time were actively against any psychological intervention. What would they think of me if I mentioned I might want to see someone. The shame, embarrassment and the fear of yet again losing acceptance of my friends were great. Yet despite all that, I had to do something.

I thought maybe there was someone of use; A psychologist who had been a  minister in the same church my family had belonged. He had left the ministry, went on to study psychology and had been in practice for many years. He knew my family. Perhaps he wouldn’t mess with my head, and because he knew the family, he wouldn’t allow himself to do any damage to me.

I had some crazy ways of thinking – Do not judge me too quickly – check out your mind right now.

It was the days before Google, so the phone directory was the only place to find his phone number. I couldn’t ask anyone because they would then know – I couldn’t take the shame of it. I don’t understand why we all think that we have everything inside us to live a good life, and the concept of talking and seeking help mental is such a big problem, but it is. I guess it exhibits what we see as a weakness, and we can’t be seen as weak, particularly if we are western males.

When I was alone, I found the phone number and then put it in my diary to call. I would put this on my to-do list every day, and I do mean every day for the next two years. Afraid to make the call. I would also write it in code so that if anyone else saw my open diary, they would have no idea that I wanted to see a psychologist. There would be no way they could work out the person’s name. I would just right GB on my to-do list.

Then finally, on one July afternoon, just after lunch around 2 pm, I remember it that well – I made the call. It took less than 3 minutes – I made an appointment and hung up. I walked around to my work area at home and sat down. Creative problems I had been battling for months just faded away. Within a couple of hours, I had the backbone of the album completed, solved one of the significant dull area’s of the project, and was looking forward to the completed job. I would have no problem meeting the deadline for its release. Yet all I had done was make a phone call.

It was so much more than that. What I had done was to stop the stagnation. If you look up stagnation in a dictionary, none of the meanings is particularly desirable, so now I had created a movement forward away from that. A move forward away from just sitting and waiting for life to change;  No longer was my life in a holding pattern. I wanted to find out why I felt the way I did, and why it held me back. I long longer was wasting valuable energy trying to stop my life’s trajectory. I was moving.

“Everything affects everything else.”

Suppose we think about the Hero’s Journey. Joseph Campbell outlined the classic story form in “A Hero with A Thousand Faces” and further explained it in Christopher Vogler’s “The Writers Journey.” There is a moment, the call to adventure, that will forever change the character’s life path. The motivation can come from within or external action. It frees up the movement of life from the ordinary and current stagnation to an opportunity to become more. Think of every movie or show that you have seen just this week. There will be an incident, a moment, or an action that the if not taken, the rest of the story will not exist. More often than not, they are not big, but the repercussions are because of the actions that follow.

That one phone call lead me to meet one of the kindest and insightful men I have known. Together with Gorden’s support, I explored many aspects of my life. It allowed me to see many patterns of behaviour that didn’t serve me well. But most importantly, I permitted myself to explore every aspect of my humanity I was willing to examine.

Gorden was the first of many people from various professions and views on life I met over the following years. When my health deteriorated some six years later, it gave me the tools and, most notably, the attitude and willingness to explore the alternatives that, in the end, saved my life. Everything would have been significantly worse had I continued to stagnate.

So what does this mean for you?

If you are like the rest of humanity, there is no doubt something significant that you are putting off. Something that, like my procrastinated phone call, could save your life. We procrastinate because we are afraid. Afraid of what the outcome may be, fearful of what others will say, afraid that our lives will not be the same afterwards, yet that is precisely what we want – a different, a better life.

The best advice I ever heard: “Be who you are and say what you feel because people who mind don’t matter and people who matter don’t mind.”

Is there a relationship issue you are avoiding, a new career, a tax return not submitted, or something else more profound? Indeed, there may be a phone call you are avoiding making. As I wrote about in “Endless Summers?” there is only so much time left to enjoy. So let loose the powers that lie within you – act today; you may be surprised at the results. Not only on that one item on your list, but the rest of your world today. It may free up energy that you failed to see that you had already lost.

“The Hero with A Thousand Faces “– Joseph ‘Campbell.

The quote attributed to Dr Seuss has had an interesting history should you wish to explore it further please go here.

In a busy life it is often hard to see how one person can impact the world and people around us. Here are Two very simple things we can all do to make impact. To influence the world in ways that express our values.

Trust is one of the essential foundations of human society. It holds families and worlds together, and when broken, disaster follows. Families can fall about, and countries can go to war. We often see trust as a black and white concept. We can either trust or not but perhaps considered trust is a mature option. Something to ponder…