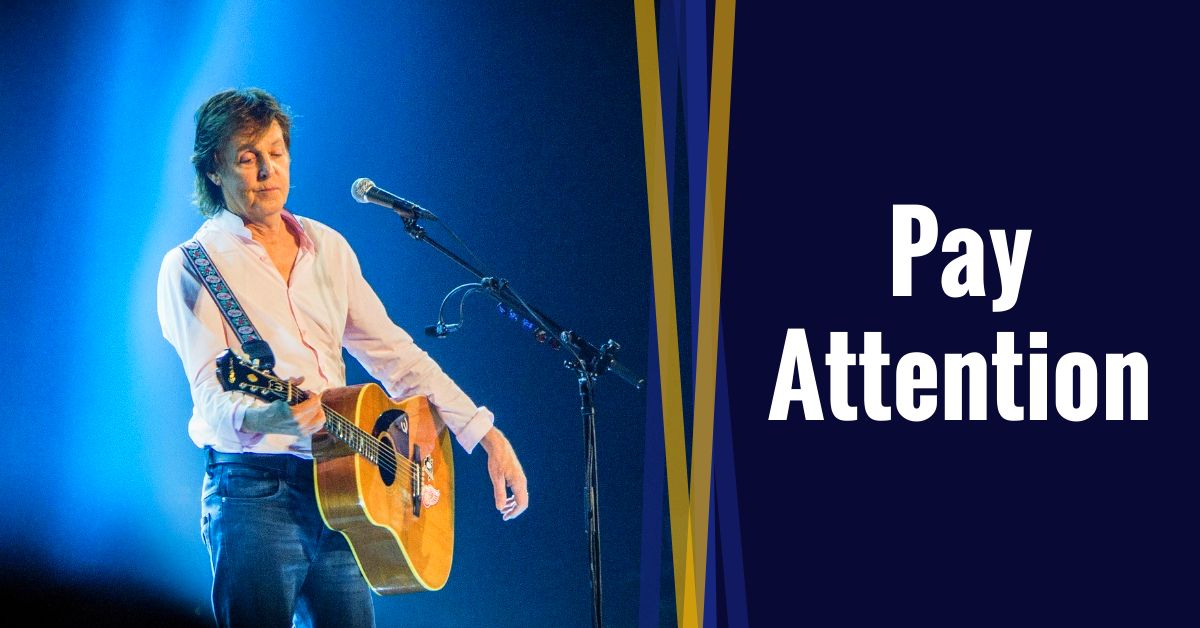 In 1966 on a plane coming back from Kenya, we find Paul McCartney. Frustrated with the trap that success had created for The Beatles he comes up with an idea for a song. That song eventually formed the impetus for a new album. Partly inspired by Bryan Wilsons Pet Sounds album, McCartney wanted to explore the idea of creating an album about a fictional band. The music of that band could then be made in a new exploratory way and not be limited by having to be a “Beatles” album.  Sgt. Pepper’s Lonely Hearts Club Band was born. Arguably the greatest album of all time.

That’s the thing with success – people know you for one thing – they expect that same again – but different. Take Liam Nesson – how many versions of “Taken” aka action movies have you seen him in. That is what actors call being typecast.

Here was McCartney’s answer to the problem – an album about a band within a band.

Yet it was far more revealing about the future of the band; almost the ultimate Freudian Slip.

“We didn’t know it yet, but we had already imagined ourselves into a different life!”

That’s the thing about Freudian Slips – it’s a slip of the tongue or action that is motivated by and reveals some unconscious aspect of the mind. Maybe if The Beatles had been able to recognise this and act on it at the time – what ultimately became the breakup of The Beatles may have just been a devolution of the band. Each member may have slipped into their respective music careers without the angst. Or John may have gone his merry way and George, Paul and Ringo may have created something else. Who knows – its all just a matter of speculation anyway.

Where is the meaning for you and me?

This stuff happens all the time. We constantly reveal to all and sundry what is going on in our unconscious and possibly in Jung’s concept of the collective unconscious.

It can allow us to “see” problems or opportunities they lay ahead and prepare – to dig the well before we are thirsty. Be ready to leap should the great chance arise. Or prepare to deal with a problem before it gets ingrained into our makeup.

In one of its simplest forms, we have all seen it happen. Two of our friends our often arguing and fighting with each other, and we sit on the sidelines knowing full well that they like each other and are not surprised when they end up together romantically.

The skill is recognising this. To listen –  To observe.  To do it for the most important person we think we know, who remains, for the most part, an undiscovered country – Ourselves.

This is where Meditation can be useful – it slows down the workings of the mind allowing it more time to “see” more.

Once I became aware of this, I would notice any observations and criticisms I would make of other people and more often than not I could find a home for some, if not all,  within myself.

Mark Wolynn talks about using these observations in his Book “It Didn’t Start with You“. He listens to his clients,  looks for the keyword or phrase which is repeatedly used, as a way into where he can start treatment.

Apart from Meditation, or for those who have prayer as a foundation, what else can we do?

I’m currently reading Maria Koonikova’s lastest book – “The Biggest Bluff”. It’s byline – “How I Learned to Pay Attention, Master Myself, and Win,” says it all. In the game where “tells” pay off big time, paying attention is the big key. When she sat down with her mentor and coach Poker Hall of Fame inductee – Erik Seidel, it was his first and most crucial lesson – Pay Attention.

It is easy to let time and days pass, especially if it is part of the regular routine. However, each day is time to learn to see what more we can make of our understanding. The more we seek to understand the more straightforward and easy moving through our lives becomes.

Paying attention is like a muscle it gets robust and easier to use the more it is exercised. Our skills of understanding human nature and the world around us are increased, thus improving the results from the fate and luck that life can send our way.

It pays to ask the question “What’s Really Going On Here?”

It Didn’t Start With You – Mark Wolynn

Image by DarkmoonArt_de from Pixabay

Life itself has three parts – birth, life and death. Our bankers ever afraid of fraud created a banker’s 3 with a flat “top” to stop it being changed into an eight. And for those of us who are religious in nature many religions have Triple Gods – The Father, The Son and The Holy Ghost, in Christianity and the Hindu Trimurti with Brahma, Vishnu, and Shiva.

So today again we have three fast, easy to read, potentially life changing ideas to ponder, raise questions and absorb or reject. You won’t be bored.