I Love A Good Funeral 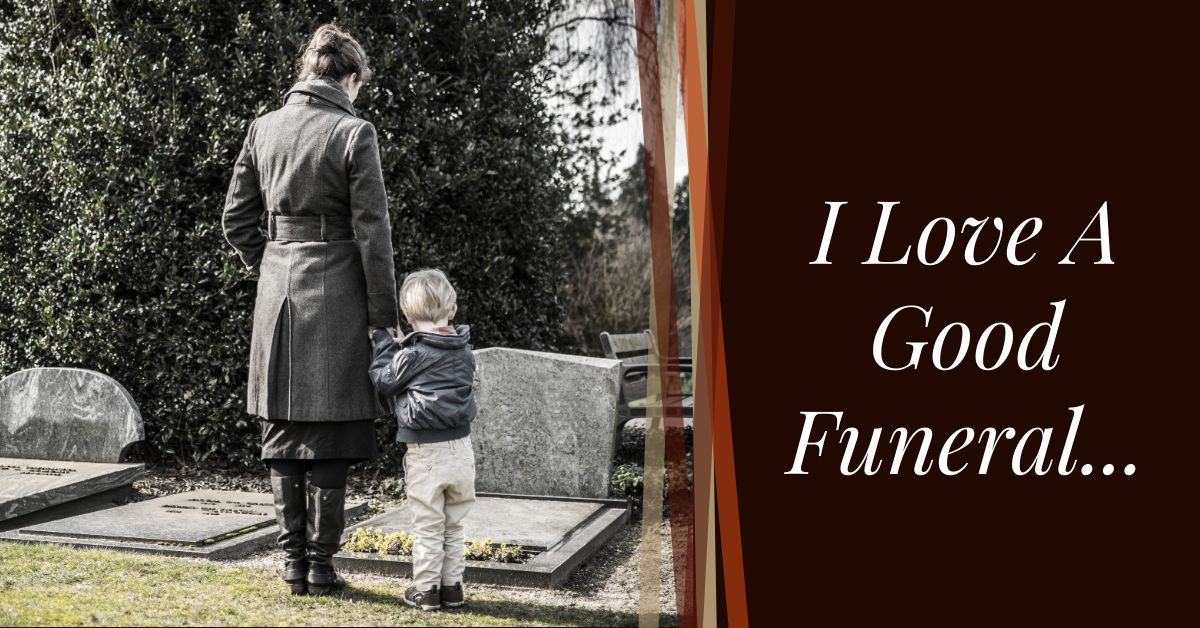 I love a good funeral.

Richard Attenborough’s 1982 film “Gandhi” opens with a sunset over the Ganges River and these following words drift onto the screen:

“No man’s life can be encompassed in one telling. There is no way to give each year its allotted weight, to include each event, each person who helped to shape a lifetime. What can be done is to be faithful in spirit to the record and try to find one’s way to the heart of the man . . .”

My father recently received a phone call from the executor of a will. The request was a little unique but not unusual; he was asked to conduct a funeral service. The recently deceased had requested if he was still alive that he perform their burial service has he had done for the partner over ten years previously.

My father has been conducting funeral services for 60 plus years. First as minister of religion and then as he moved away from that faith as a civil celebrant. A civil celebrant in Australia is a government authorized position and are often called upon to conduct all the services around significant life events, particularly if there is no faith or in many cases multi-faith services – it keeps everyone happy.

Dad has a unique gift. After spending little more than an hour or two with the grieving family, he can distill and synthesize the person’s essence, which then can be expressed in the eulogy during the service. He finds that half a dozen or so events that encapsulate the person. It is not unusual for friends and family mistakenly believe that he has known their friend or relative for many years. He has a way of getting “to the heart of the man…”.

Yes, I do love a good funeral. Don’t get me wrong there are some funerals I would rather not attend; Particularly an early death or youth suicide. They can be exceptionally tough. However, even there, I try to see through the grief into the individuals’ experience of life.

I look forward to the eulogy and to meet the other friends and family. I want to know more about what my family member or friend’s life. I have only my solitary window into their life. Their life was much bigger than me, there was and is so much more about them, something that can only be experienced through the gifts and insights of other people. A funeral exposes the real heart of a human, both deceased and mourner. There is an opportunity to see more of the person as through grief; we can see more of the emotional connection with each other.

It is said that memory is a shared experience. We leave the responsibility of recalling certain events and emotions to those around us, and them us. I have looked back into my mind to capture the memories of friends, or family, who have passed on and like my fathers’ skill, I generally find only about half dozen experiences to hang meaning onto. What is more lasting and greater depth is the feeling and emotions I have experienced whilst we were alive together. That is what I miss.

I am reminded of the film “Shadowlands” (1993) – staring Anthony Hopkins. Hopkins is playing C.S. Lewis, the author of “The Lion, The Witch and The Wardrobe,” a very different role than his oscar-winning performance in “Silence of the Lambs”.  The film explores the one and only romantic relationship of Lewis life – Joy Gresham, one cut short by her early death. Not long after her passing, there is a moment where we find Lewis grappling with grief, struggles to remember Joy’s face. He is losing the visual memory of her.

“What’s happening to me, … I can’t see her anymore. I can’t remember her face...…I’m so afraid of never seeing her again

I think of all those I have lost; I struggle to remember much of there physical appearance. There are hints, but the full faces are transitory.

Think about those who you have lost. How many events do you remember? Probably a half dozen or so, but probably not many more. How many faces are fully formed? It is the hearts experience that lingers.

Biographers interview hundreds and somethings thousands of people to write the definitive book on someone’s life. Yet how many biographies of some individuals exist, and some with a different take on the same event. Rather like observers of a car accident. So many versions, so little reality.

Recently two colleagues have independently shared that they are writing the memoirs to solve this problem. The problem that we each know extraordinarily little about each other. That the experiences we have are a shared one, the memoir is the chance to a least pass on more than a half dozen memories.

However, most of us will not write a memoir, or have one written about us. Someone will not see us as having some historical significance. But we do have control; control of what those small number of memories that others will have of us.

More than likely, they will be memories of character, dreams chased, fulfilled and unfinished. Families built and relationships discovered and created. There will be flaws, unfulfilled promises and possible regrets. If it were not so, we would not be human or fully alive. It where we will end up – that is important. And if those memories are few let us aim to have the be of significance, they may continue passed a generation.

Although as I pointed out in “Brett’s Philosophy” in hundred years we will all be dead and we will be lucky if anyone remembers our names – so let us not hold back, make our lives extraordinary. Let those half dozen memories be of significance. Have those interactions with others are remembered fondly, and our lives continue in the ongoing impact we have had on those around us.

None of us has control over what happens to the things we create or build. We give our best, we learn, we improve, but in the end, the happenings after we release our actions to the world, are out of our hands.

I’m reminded of a recent interview I saw with Don MacLean – the songwriter best known for “American Pie”. He has always been proud of its composition and feels lucky that it is the song he is best known for, as he considers it his best work. Shirley Bassey, of “Goldfinger” fame, and Bon Jovi – “Livin’ On a Prayer” fame, are destined to perform songs they would rather avoid.  That’s Luck!

We, like Eva Cassidy, may be destined to live a life of no compromise. A concession may lead to record label success but an unhappy heart, only to be discovered after her death. Her remarkable re-working cover version of “Over The Rainbow” set her apart. That is the memory that those who know her take with them everywhere – her uncompromising spirit – which is what made her great.

We may not be able to control what exact memory someone had of us, but we can determine the essence of the memory. It will depend on how we live our lives. Let us seek to live lives of virtue; wisdom, morality, courage and temperance.

It is said that poetry captures what prose finds it challenging to express or illuminate ideas beyond the conscious mind.

So till next time… the words of Henry Longfellow.

A Psalm of Life

What The Heart Of The Young Man Said To The Psalmist.

Tell me not, in mournful numbers,
Life is but an empty dream!
For the soul is dead that slumbers,
And things are not what they seem.

Life is real! Life is earnest!
And the grave is not its goal;
Dust thou art, to dust returnest,
Was not spoken of the soul.

Not enjoyment, and not sorrow,
Is our destined end or way;
But to act, that each to-morrow
Find us farther than to-day.

Art is long, and time is fleeting,
And our hearts, though stout and brave,
Still, like muffled drums, are beating
Funeral marches to the grave.

In the world’s broad field of battle,
In the bivouac of life,
Be not like dumb, driven cattle!
Be a hero in the strife!

Trust no Future, howe’er pleasant!
Let the dead Past bury its dead!
Act,— act in the living Present!
Heart within, and God o’erhead!

Lives of great men all remind us
We can make our lives sublime,
And, departing, leave behind us
Footprints on the sands of time;

Let us, then, be up and doing,
With a heart for any fate;
Still achieving, still pursuing,
Learn to labour and to wait.

“Stillness is The Key” – Ryan Holiday

“When All You’ve Ever Wanted Isn’t Enough” – Harold Kushner

Is a secret something you tell one person at a time? Or is it something more?