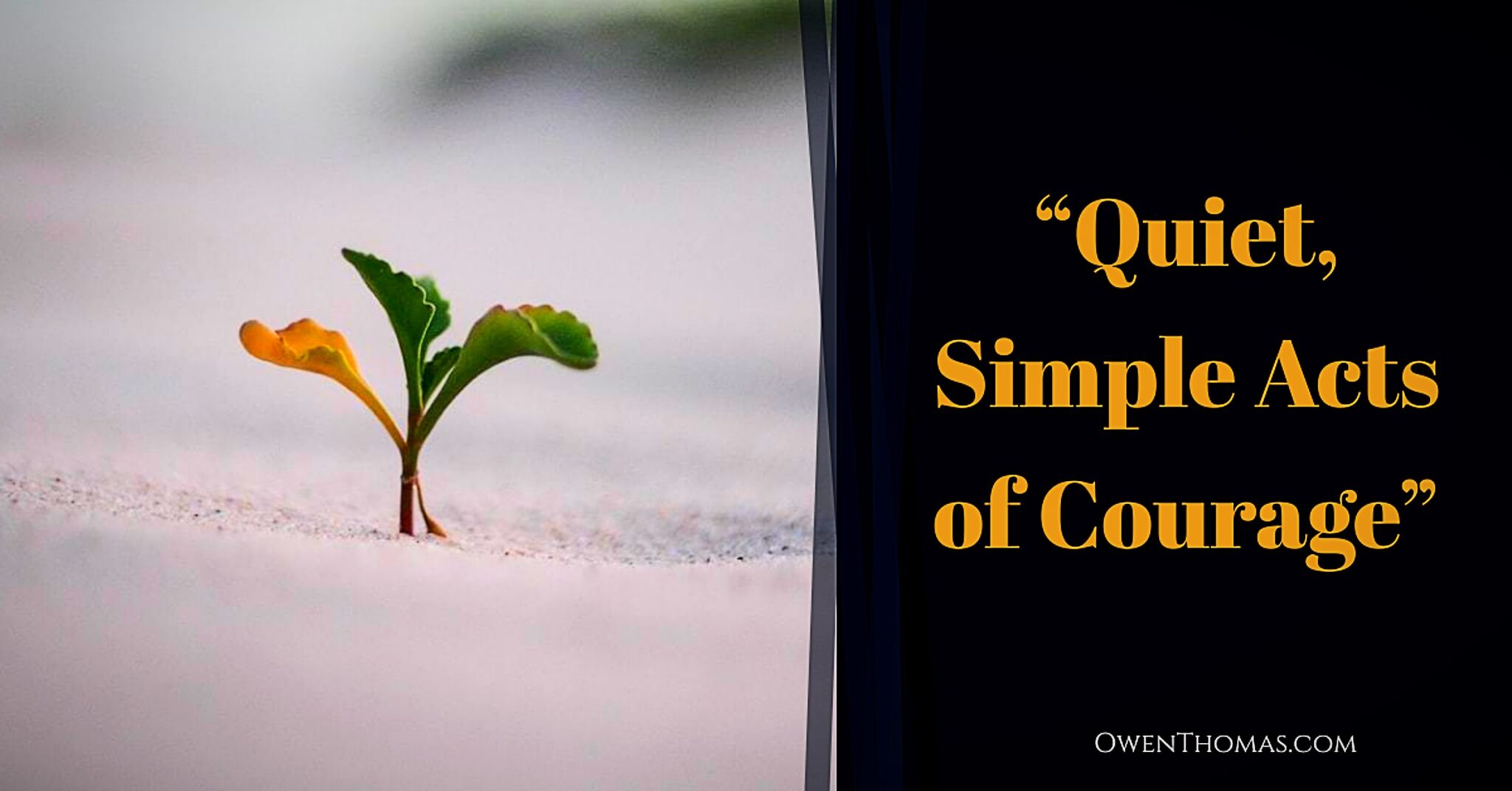 October 12, 1945 – Washington – The White House. In the aftermath of World War Two, President Truman is standing smiling at a soldier awarding him the Medal of Honor. The Medal of Honor is the highest and most prestigious military decoration awarded to American servicemen and women. Yet this man has never fired a shot. He is a conscientious objector. He refused to carry a weapon. He is awarded the Medal for rescuing seventy-five men, one by one, under heavy enemy fire and bringing them to safety. More than likely, he saved some very same men who at one stage would have ridiculed him for his beliefs and wondered who this strange person was. This action was not the first time Army Corporal Desmond Doss received a medal for his actions as a man of unquestioning courage.

Life-threatening courage is the subject of many films, books, news broadcasts. We are familiar with the stories of brave citizens diving into cheerless waters to rescue someone who has accidentally just driven off the road. Or the many civilians who risk their lives fighting fires, storms, or other natural disasters to save people who moments before were perfect strangers. Our media is full of such stories, and rightly so. Those actions deserve and must be acknowledged. We deprive ourselves if we do not. Yet each day, there are quite often simple acts of courage that go unnoticed, unrewarded, unrecognised, yet demand everything a person has within them. The threat of discouragement is more significant than any chance of success or victory. The dark, murky waters of depression are lingering and are ever so tempting to slip below its surface and disappear.

Three years ago, one of my closest friends suffered a massive stroke. We are lucky to have him still. However, it left him struggling with speech and memory; all the things we had known him for were now missing. His career shattered, and the every day, the commonplace, all became burdens to himself and his family.

Once the initial threat to life has disappeared, the long, slow trip to recovery begins. When we say recovery, what do we mean – in some ways, it’s a destination point that we have no real vision of and is somewhat nebulous in form. It is difficult to know what we have, let alone define it when it is gone. Then we hope to regain it at some distant point in the future and do not know what scars will remain.

My friend lives in another state nearly one thousand kilometres away. We grew up with parents who had the same professions, which caused us to crisscross the country many times. We have only lived in the same location for a total of six years and not all at once. Yet the bond between us has always been there and strong. We have seen each other succeed and fail, babies born, and daughters graduate; It has been a long friendship. I have received kindness from both them and their extended family. I have been very fortunate.

There has been a tradition to speak to each other on Christmas day for most of our adult lives. It would be a challenge as to who would get to make the phone call first. I very rarely won. When the stroke occurred, those phone calls stopped. This year, for the first time in three years, at 11:40 am, a call came through. It was the second call this year. The first was for my birthday. It hadn’t been very long, but it was a pleasure to receive. The conversation on my birthday was slow and measured with many pauses. I tried my best not to rush the conversation or be condescending, a trait that is all too easy to fall into for any of us. This Christmas call, it was remarkable how strong my friend’s voice had become, and the speed of our communication was very much on the way to a familiar pattern.

That didn’t happen by accident. Over the previous three years, there had been daily, uncomplicated, quiet acts of courage to confront the same demons without any certainty that there would be a defeat or indeed success at all. Yes, there were many therapy sessions and support from excellent practitioners, but they are, in the end, are just a limited part of the solution. The small daily acts of courage in the quiet times alone facing the mirror prepared to try yet again to move forward; they make the difference.

There is the simple, quiet act of courage, late in life, to pack a bag with most of what you own and walk out of a toxic, dysfunctional home. A home full of drug-induced rampages, drug deals, and gambling addictions. Move across the country with no home, no job, minimal money, and no certainty and to begin again. A line in the sand was drawn – it was drawn with an unknown future ahead. That’s true courage. Quite, simple and often unrecognised.

A twenty-year-old Vietnamese migrant struggles with a new language the unfamiliar sounds – the different way of thinking. Yet, she knows full well that the language will determine success in her life, her ability to integrate and build a life of meaning and purpose and a new place to belong. So each day, she records a talkback radio program, then stands in front of a mirror with two recording devices – one to playback the recording, the other to record her voice as she endeavours to replicate what she has heard. She does this day after day, week after week, month after month, until she speaks flawless Australian English like a native. A quite simple act of courage.

It takes courage to question the status quo that currently dominates a worldview to take quiet civil disobedience against laws or procedures accepted by the conditioned majority as the only way to live. Rosa Parks was just such a person. She was famous for her refusal to give up a seat on a bus in Montgomery, Alabama, in 1965. This refusal was not the first act of courage but a continuation of a lifetime of small but consistent action. As she once wrote, “I talked and talked of everything I know about the white man’s inhuman treatment of the negro… it took a “major mental acrobatic feat” to survive as a black person in the United States. She highlighted “that it was “not easy to remain rational and normal mentally in such a setting,” she refused to normalise the ability to function under American racism.

We know of Rosa Parks, but how many others remain unknown to us from different times and places?

These quite simple acts of courage occur every day. In many ways, we are surrounded by them, often without our knowledge and often in ourselves. They are not the acts that receive the media attention or any attention at all in many cases. Yet they dip into the same human well that Corporal Desmond Doss plunged into to find the strength to go back time and time again to rescue his fellow soldiers. People’s lives may not be under imminent threat of death but make no mistake their lives are still on the line as the activities they take that day will play out and determine how their lives work out.

As national and personal history shows, these quite simple acts of courage against inner demons, fate-induced problems, or indeed societies and countries failings, are the foundations that build new possibilities and, in the end, long-term, robust, durable communities and families.

Till Next Time – Something to Think About and Share.

Yesterday, at 5pm, my mother’s cousin died aged ninety-one. With only three days to Christmas, it is a reminder that no matter how much we like to imagine, we only have so many celebrations and family gatherings allotted to us. Let us remember to make it a good one.

The past in a handful of ashes – there is not much left after the years. How do we turn it into gold?

Most of us can have problems that sometimes seem insurmountable. Is there a way of looking at them that can allow for more solutions and a happier and more meaningful life?
I believe so…Enjoy – Let’s get into it.