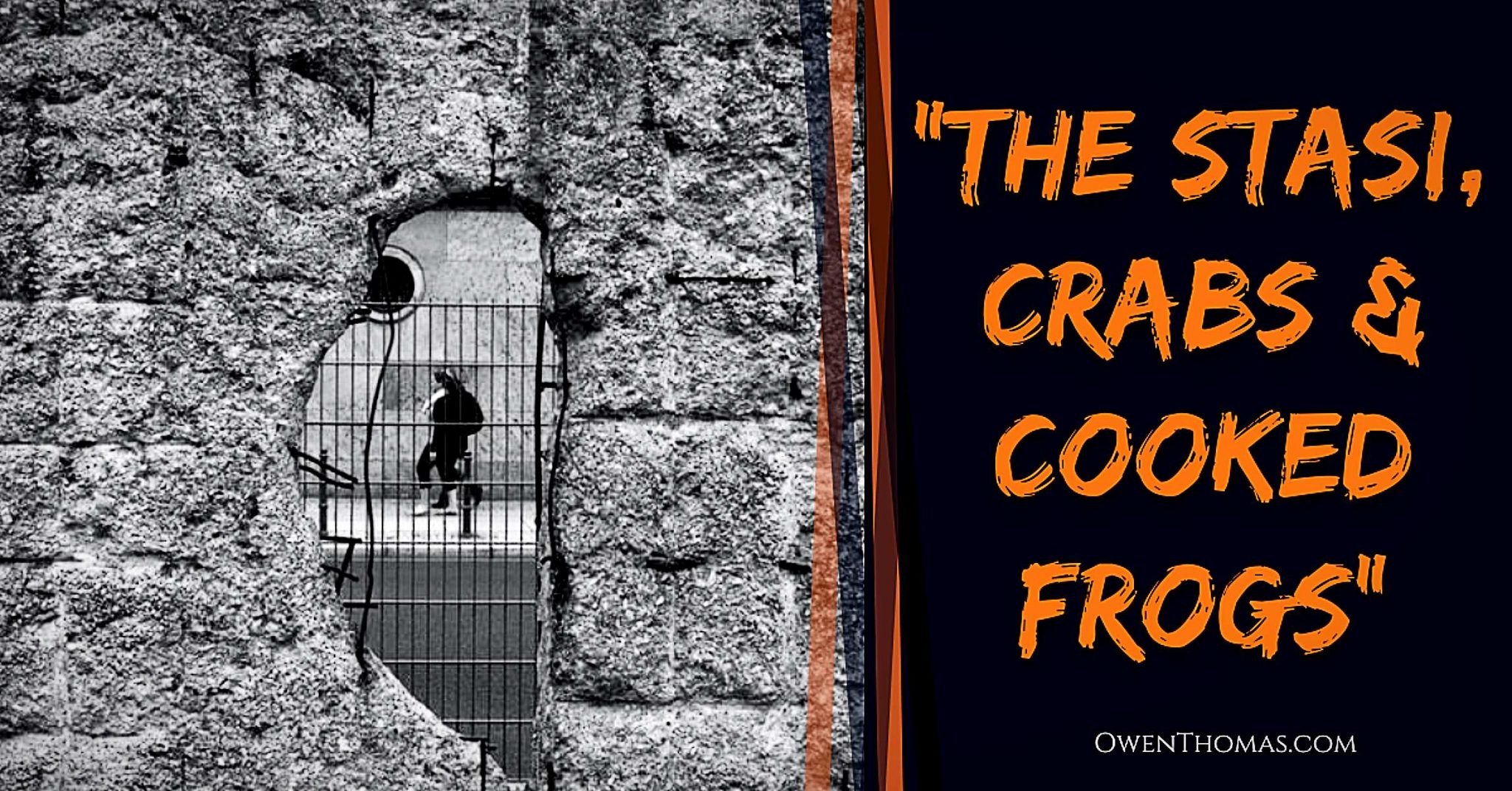 It is said that the simplest way to catch crabs is to forage along the foreshore with a big bucket with some sand and seawater at the bottom. If you find the appropriate crab, pick it up carefully, avoid the claws, and place it in the bucket. Over time, your bucket will fill up with crabs. However, you don’t have to worry about the crabs escaping as their fellow inmates will pull them back into the bucket.

Cooking frogs are a little different. It is easy if you lull them into a false sense of security. First, you use a pot with cold water. Place your unsuspecting frog in the saucepan, and then set it on low heat. Do not put it in hot water; it will leap out, leaving you a little shocked and disappointed. The key is the cold water on low heat. The frog will keep swimming around enjoying it itself until finally it’s cooked, dead, and ready to eat should you wish to explore the French side of your palate.

The East German Security Police — “The Stasi” has been described as one of the most effective and repressive intelligence and secret police agencies to have ever existed. East Germany was part of the spoils of war for the Soviet Union and created out of the destruction and defeat of the Nazis at the end of World War Two. It came into being in 1949. The Stasi followed soon after. One of the Stasi’s main tasks was spying on the population, primarily through a vast network of citizens turned informants, and fighting any opposition by overt and covert measures, including hidden psychological destruction of dissidents. Yet in 1950, at its inception, all that was still head of it. In response to approximately 3.5 million people “defecting” to the west over the preceding years, in 1961, it built the Anti-Fascist Protection Rampart — commonly called the Berlin Wall. The barrier included guard towers placed along large concrete walls, accompanied by a wide area (later known as the “death strip”) that contained anti-vehicle trenches, beds of nails and other defences. Between 1961 and 1989, when the wall finally came down, over 100,000 people still attempted to escape, with only 5000 successfully. Hundreds of people were killed trying to escape, either by border guards, booby traps and other such devices. Those captured would spend large amounts of time imprisoned, often in long-term solitary confinement.

Early on, the Stasi used primitive, violent torture techniques to deal with dissidents and agitators who disagreed with the state-sanctioned ideas. However, as it became more experienced, it used powerful physiological processes to trap people, reveal secrets, and persuade them to change their minds. They found it a far more successful strategy – to use the mind against itself.

At the height of power, it is estimated approximately 2.5% of the adult population were informants and many, many, more as occasional “spies” on their friends and family.

If you combined this with state-sponsored media, it would be tough to see the world any other way.

“When you choose what media to consume, you are choosing your future thoughts and perspectives and opinions. And if you choose poorly, you will think poorly.”

Let us not be too hard on the people of East Germany who lived through those years. Remember, they had all just come out of the horror and terror of WW2. They had seen the destruction of their known world. Yet, they were given a narrative and a belief system that promised a better world, and many people would believe almost anything to avoid what they are convinced, even if it is incorrect, would be a terrible outcome.

As Jordan Peterson points out in his bestseller –“12 Rules For Life”– we like to think we would be the exception to the rule. The person who saves the Jewish neighbour from the horrors of the Nazis. The man or woman who would risk it all to escape from a terrifying regime. Or we would perhaps plan and scheme, hiding banned books and documents that disseminate another way of life. However, if we look at history, we, more than likely, would not be that person. We would more likely be the oppressor; we would accept the party line, we would not question, not look too deeply, not risk or upset the status quo. Particularly if there is a convincing narrative, a powerful explanation, and we have been sold a good story to explain the world in which we live. It is very difficult to live with the anxiety of being wrong. It is far easier to “believe” we must be right. It is easier to hand over our thinking to another power. Whether that be a person, organisation or state.

Remember, each of those people shot attempting the crossing of the Berlin Wall was shot by another human being just like you. The person, informing, is just like you. The torturer was someone just like you. But, the someone who came over time to believe that what they were doing was right – was best for all. Think of that next time you look in the mirror – you could be that person. We all have those qualities that lie inside us. Often rather than to admit that we may be in error we double down on our ideas. It is then we often see the real horrors of an errant belief come into being.

Many of those border guards and former Stasi officers still, to this day, have a measure of pride in what they achieved.

Remember all this happened over time. Slowly, bit by bit, a way of life can change; it is incredible what we will give up if we are sold a good story. And just like the frogs, we, in the end, are cooked, and we don’t even know it. Then our crab-like personality comes into play. We hate and fear seeing others challenge the way we see the world, and we will do what we can to bring them back into the happy world of our bucket, little knowing that we too are destined for the pot.

Let us not be afraid to question, and not easily give up hard-won freedoms of thought and action. To not rush into the vortex of emotion too soon, but step back and wait and let reason be our guide.

“If they can get you to ask the wrong questions, then they don’t have to worry about the answers.” — Thomas Pynchon – Gravity’s Rainbow.

The Stasi and the Berlin Wall | DW Documentary